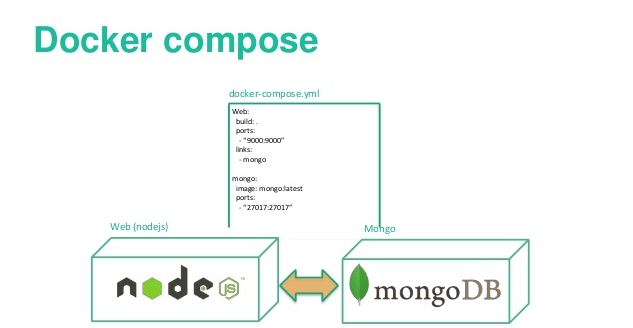 In my previous post I detailed how I Dockerised the MedRec app. In this post I will show how I added MongoDB and defined a stack using Docker-Compose.

According to the official docker documentation ;

“Compose is a tool for defining and running multi-container Docker applications. With Compose, you use a Compose file to configure your application’s services. Then, using a single command, you create and start all the services from your configuration. ”

A single command to create and start all the services in a configuration sounded pretty good to me. I definitely was keen on exploring docker-compose.

Having proved that my web application runs up, I now need to address the persistence layer. The above Dockerfile contains the steps to create the required runtime platform for my node app, and installs the node application and package dependences (as specified in the package.json) file by doing the npm install. However if I tried to do a GET or a PUT my app will fail as it won’t find a MongoDB inside my container. I therefore still need a MongoDB somewhere in my environment to hold my application data.

As I understand things I have essentially two options;

I decided to try out the docker-compose approach. In the root directory of my project I did the following;

I then edited the above file to contain the following;

In the above file there are two services defined ( web application service and the mongo database service) .
The links section points out that there is a dependency on the service detailed in the mongo section.

The image section shown under the mongo service, allows me to specify the docker image to pull from my registry of choice (in my case I am using Docker Hub).
For my purposes I chose to use an official mongo database image from the docker hub image repository.
The file also highlights that the container network ports 3000 and 27017 are mapped to ports 3000 and 27017 on the host (which in my case was my Ubuntu VM).

Note: If I wanted to use a different public or private docker repository I could just have easily referenced a different image and repository location using the following syntax;

I used the following command to build the image using the docker-compose utility and the configuration specified in my docker-compose.yml file;

To start the container I did the following;

Note: I experienced the following issue when executing the docker-compose up command.

The issue was that I had MongoDB installed locally and it was still running and a port conflict was the result.
To prove it I did the following;

OCCS provides a runtime environment for Docker images, think of this as Bring Your Own Container. It is not a Docker build environment. It supports some of the docker-compose functionality but not all. This presented me with a small issue when I wanted to deploy the image and tried to use my previously created docker-compose.yml file because it contains a “build” reference in it. For an OCCS deployment to succeed the image would have to exisit (already have been built) so that it could be pulled into the OCCS runtime environment. I decided to separate concerns of build and run and created an occs-stack.yml file based on docker-compose.yml. I had to make two changes to the occs-stack.yml file to get this to work.

The areas of difference between docker-compose.yml and the occs-stack.yml files can be readily noticed.